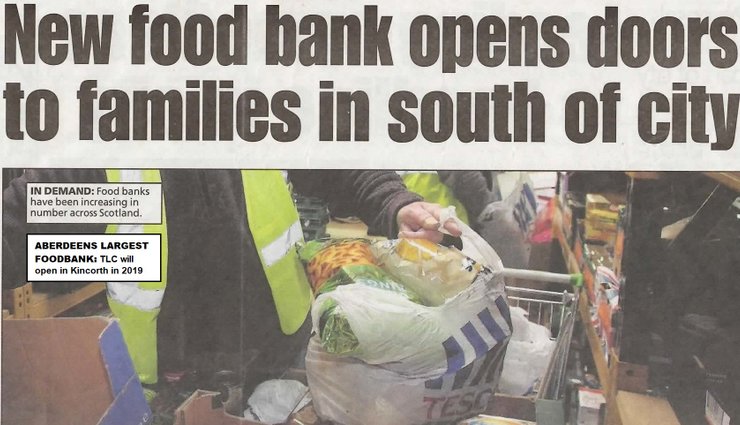 In 2019, Aberdeen's biggest Foodbank, TLC, will open its doors to the community of Kincorth.

TLC, who have been operating since 2002, have 50 partners drawn from voluntary and community groups, schools, council departments, faith based groups and public sector staff. They have foodbank distribution centres operating in Torry and Garthdee.

TLC Chairman Rick Brooks said, "Last year we supplied food to Instant Neighbour and CFINE as well as providing for our two main distribution sites in Torry and Garthdee. We have been engaging with the community regularly thoughout 2018 and with the help of South St. Nicholas Kincorth Church, we will officially open in 2019, operating once a week on tuesday afternoons from 1pm until 4pm."

Reverend Eddie McKenna said, "We are working with TLC because the need across my community is a growing concern. This will make huge difference to our area."

Throughout 2018, the major crisis that led to foodbank usages was dominated by the 'low income' category. Other factors such as debt, and benefit changes have also caused people to visit one of the TLC foodbanks. TLC gave out over 13 tonne of food in 2018, a 40 % rise on the previous year.

Rick Brooks went on to say, "We work primarily in the South of the city. Our Operations Officer, Tim McIlroy is doing a great job in reaching this community, making a real difference to those suffering from food depravation. We have over 30 volunteers, without whom we would never be able to operate. I am sincerely grateful that people generously come with their time and talents, and the people of Aberdeen give through our supermarket partners Tesco and Sainsburys."