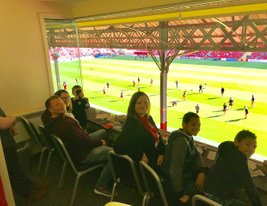 Social Action group TLC, who run youth groups, breakfast clubs, community groups and foodbanks have teamed up with Aberdeen Football Club Community Trust (AFCCT) to provide facilities for charities, groups, and families that would ordinarily not have the opportunity to watch a football match in a coroporate hospitality box. One of the families using it this week was a single parent family who were able to invite their friends for a 'one of a kind' experience. Ingrid Akindileni said, "This is a wonderful experience. I cannot thank Richard Brooks, TLC and Aberdeen Football Club [Community Trust] enough for doing this for us."

TLC Chairman Rick Brooks said, "We are delighted to jointly sponsor this opportunity with AFCCT for the 2018/19 season. No one can truly measure the way this will affect the communities we work into. I serve and support some of my city's poorest and most vulnerable people and families. To have the opportunity to work with AFCCT and offer this facility is a winner for all involved."

AFCCT Chief Executive Ally Prockter said, "We are delighted to be sponsoring the main stand box with TLC, as this partenrship enables us to give support to many of our own participants as well as other organisations."

TLC, who have been operating since 2002, have 50 partners drawn from voluntary and community groups, schools, council departments, faith based groups and public sector staff. They have outreach and engagement projects across Aberdeen, and in particular in the South of the city.